A new study on plant-pollinator interactions by Paola García-Meneses and Paul Ramsay is about to be published in Basic and Applied Ecology. It is the first to show that the relationship of a plant to its neighbours within patches affects pollinator visits and reproductive output of the plants.

It is well known that insect and bird pollinators are attracted to patches of flowers where rewards are greater. In fact, some birds set up territories around the plants and chase away others. Typically, the idea goes, plants in big patches get more visits than plants in smaller ones, and individual, isolated plants would be expected to get the fewest visits. This sometimes leads to better reproductive output of the plants in larger patches. But this may not always be the case...
Read more »
Posted by Paul M Ramsay at Wednesday, September 26, 2012 No comments:

The way that University weeks work here at Plymouth for our department means that, just a day after saying goodbye to one cohort at graduation, the next cohort of first years arrive to start their university journey.

Induction week is packed full of things to do for our new students and is a mix of serious activities and admin as well as some more fun activities (quizzes, days out, drinks receptions....).

Today marked the annual outing to Mt Edgcumbe on the Cornish side of the Tamar. Many thanks to Mount Edgcumbe House and Country Park for giving us permission to go there and do our surveys.

Today was graduation day for the class of 2012. Our graduation ceremonies are held on Plymouth Hoe, overlooking Plymouth Sound and we were lucky again with the weather. The photos tell their own story really:

Posted by Rich Billington at Thursday, September 13, 2012 No comments:

I had a few nice photos left over that didn't really fit anywhere else. If any other contributors (or students) also have photos then either add them or send them to me:

As Saturday began, most of us were still celebrating the end of the course in one of the big squares in Ponta Delgada where they were serving caipirinhas! However, the bus to the airport was at 6 AM so celebration time was limited......

A few struggled to get out of bed with so little sleep. To be fair, setting the alarm, but sleeping with headphones on, was never going to turn out well.

Finally, we have to give many thanks to our colleagues in the Azores, Nucha, Carmo, Andrea and Paola for all of their hard work - we really appreciate what you do for us and we couldn't do it without your help. Also, the staff would like to pass on our great appreciation to all of the students for working hard, and making our job easier and the field course really enjoyable.

Posted by Rich Billington at Sunday, September 09, 2012 No comments:

Our last full day on the island was mostly spent at the University of the Azores. There were two lab sessions and time to prepare a scientific paper on the restored forest survey we did earlier in the week.

Another lab session looked at stomatal density of a range of plant species from the impressions taken yesterday. 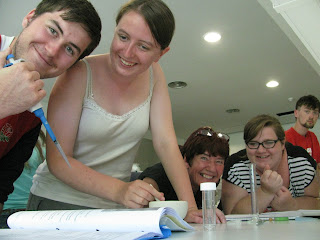 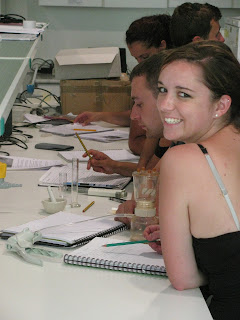 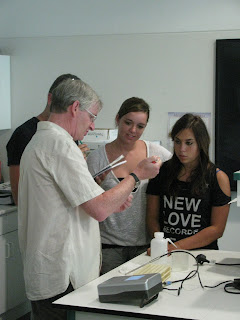 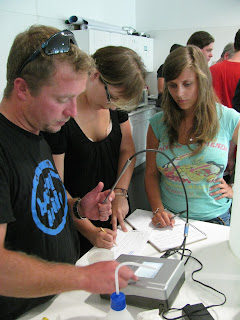 There were two assessments today, as well. The first was the "Ultimate Test" on everything we had done on the course. And by 10 pm, each of the ten groups was to hand in their scientific paper on the forest restoration work we did earlier this week. Some met this deadline calmly, with plenty of time to spare (in some cases more than eight hours), but a few groups left things a bit late. One group in particular was in real panic a minute before the deadline. You know who you are...


A few photos from outside the labs today:


Once the assessments were over, it was time to celebrate the end of the field course, and Jason's birthday. After a gentle start by the waterfront, the festivities moved on to a square where locals and tourists mingle at weekends, and sample the occasional caipirinha. As midnight struck, most of us were still there, and this blog entry runs seamlessly into the next...


Posted by Rich Billington at Friday, September 07, 2012 No comments:

Back in the field today for the last time (lab day tomorrow) at two sites in the centre of the island, Lagoa do Fogo and Caldeira Velha. As usual, the weather was not great at Lagoa do Fogo....


Today was all about looking at whether there are any differences between the endemic and invasive plants that give the invasives some sort of advantage. Field measurements included chlorophyll fluorescence using a PEA (photosynthetic efficiency analysis) meter, leaf thickness and we also took  leaf impressions (using a dental product) to look at stomatal density in the lab tomorrow. 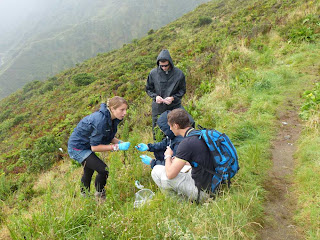 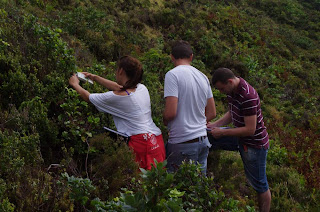 Further down the volcano, at Caldeira Velha, a different selection of plants provided further data while the "thermal" pool allowed a surprisingly cold swim!


Some even felt compelled to dance......

Every day we are seeing what seem like familiar species but most of them are endemic species or subspecies and look a little different:

On the way back to the university for food, several of the staff made a detour to the coast for a fruitless search for an endemic water beetle in the pools in the splash zone. Maybe next year... 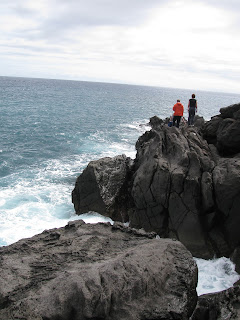 Posted by Rich Billington at Thursday, September 06, 2012 No comments:

As well as work in the field, we do some work in the lab on this field course and today was the first of our lab days. This is only possible thanks to the kind hospitality offered to us by the biology department here at the Univesidade dos Açores.

The two lab activities that we do are based around the work on the first day. Firstly, we look at the potential for pesticide resistance due to over use of deltamethrin in Pseudaletia caterpillars using an esterase protocol.


Secondly we look for both Cyanobacteria and E. coli/Enterococcus in the lake and bathing water we collected on Sunday/Monday. 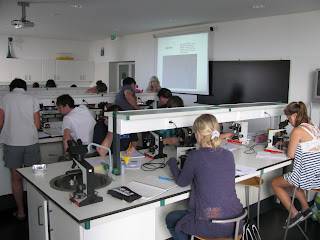 Posted by Rich Billington at Wednesday, September 05, 2012 No comments:

Our third day on the Azores was also our longest. We were off at 8 AM to travel all the way across the island to Serra da Tronqueira near Nordeste. This area is the last remaining habitat for the Azores Bullfinch, a Sao Miguel endemic. The species has suffered in the past from loss of its Laurisilva forest habitat due to the planting of Cryptomeria japonica as well as other factors. The world's population is a mere 1200–1500 pairs.

Cryptomeria japonica was planted as a source of timber and forms thick, dark forests where the Bullfinch's native food plants cannot grow. A recent project has allowed clearing of an area of Cryptomeria and the area has been replanted with native tree species of the Laurisilva forest. Many of the plants of the Laurisilva forest are endemic to the Azores (a few examples are shown below).

We have been monitoring the vegetation of this area since 2008, and today we visited for our annual Plymouth University survey to see how the trees were growing and assess the other species present. Invasive species are a big problem in the Azores, and the team managing this area has been fighting hard to control several aggresive plants like the ginger lily, Hedychium gardnerianum. Nevertheless, native species have also been arriving over the years, including several endemic species.

Once we had completed the survey, we visited one of the few remaining bits of mature laurisilva forest. Some of the group decided to walk most of the way home along the forest track. Although not everyone saw the endemic bullfinch, quite a few people did. We estimated that at least ten bullfinches were seen today. Not bad given the number of people and the noise!

Posted by Rich Billington at Tuesday, September 04, 2012 No comments: