﻿﻿﻿﻿﻿﻿﻿﻿﻿﻿﻿﻿﻿﻿﻿﻿﻿﻿﻿﻿﻿﻿﻿﻿﻿﻿Carly Benefer, a post-doctoral researcher in the Biological Sciences Group, and I have just received funding from the Seale-Hayne Education Trust to develop molecular markers to study the distribution of click beetle larvae (wireworms) in agricultural land.

Worldwide wireworms are economically important pests which live in the soil and consume crop roots, but we currently only have very poor information on their dispersal and distribution. We will use next generation sequencing technology for rapid, high coverage sequencing of DNA for three important UK species, from which microsatellite loci will be identified and optimised for use in population genetics studies. 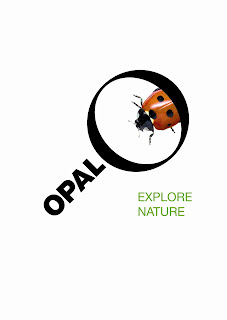 On Monday 23rd April from 6 to 9pm we will be holding a Celebration Evening for OPAL South West where we will be celebrating the fantastic work the project has undertaken over the last 5 years, with displays from schools and community organisations who have taken part. We would also like to thank our amazing volunteers who have made this all possible.
The evening will begin at 6:30pm in the Roland Levinsky Building with some short speeches, stands from environmental and community organisations and OPAL exhibits. There will be wine, soft drinks and nibbles, and the winners of the OPAL Wildlife & Nature Photography Competition will be announced. There will then be a special viewing of the photography exhibition for everyone attending. This will be a good opportunity to meet people working in the environmental sector too!
This event is to mark the achievements of the project in engaging communities with the natural world and to bring together those involved in continuing this work for the future. We are also very pleased to announce that OPAL will be continuing work beyond our original end date of May 30th, having received additional funding from the Lottery!
This is a public event so please feel welcome to bring friends and to attend whether you have volunteered with us or not.
Many thanks,
Maria Donkin ( OPAL Project Leader ) and Alison Smith ( OPAL Community Scientist )
OPAL, School of Biomedical & Biological Sciences, University of Plymouth, Drake Circus PL4 8AA

﻿﻿ ﻿﻿ C. John Thorpe-Dixon, a PhD student within the Biological Sciences Group, has just won a  Monica Cole Research Grant from the Royal Geographical Society. Only one award is granted per year so this is quite an achievement. John started his PhD in October and is studying the Biodiversity and biogeography of the Indian Western Ghats. His PhD is supervised by Drs Mairi Knight and Dave Bilton (Plymouth University) along with Dr Aparne Watve of the Biome Conservation Foundation, Pune). John has only just returned from a highly successul initial visit to India where he met up with Dr Watve and, among others, officials from the University of Pune, and the Indian Institute of Science.  He is now back in the UK and planning his up-coming data collection trip in June 2012 which will be partly financed by the Monica Cole award.
Posted by Mairi at Wednesday, April 11, 2012 No comments:


I am currently in Quito, Ecuador. I've been working at the Pontificial Catholic University of Ecuador, giving classes to a group of MSc Conservation Biology students here, and carrying out a variety of research projects in the Andes. Soon, I'm off to the mountains for some fieldwork, but right now it's Easter and I have a few days off.

Fieldwork abroad is a chance to learn a language and see something of other cultures. Good Fridays in Quito
are famous for the "Penitential Procession". It's calmed down a bit these days, but basically thousands of people process through the streets to demonstrate publically their devotion and to give penance for their sins. Many thousands more (including me) go to watch their suffering.

Some people dress as Jesus and drag along a heavy cross. THere is usually a wide range of beards on offer (including a few recycled Santa Claus versions), and an occasional Roman soldier accompanying Jesus, whipping him from time to time. People from the crowd sometimes lend Jesus a hand, but mostly the idea is that the person does it him- or herself as penitence.


Other people strap spiny cacti to their backs, wrap themselves in barbed wire, whip themselves, drag chains behind them from their ankles. All this is quite a spectable, with the public dashing in front of the participants to take photos of their grimaces and/or blood. Film crews interview people along the way
(like our London Marathon). The backdrop of the often steep streets of colonial Quito--a UNESCO World Heritage Site--adds to the spectacle. 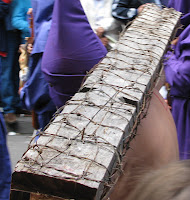 It is also a chance to get Catholic icons out of the churches and take them through the streets. Mostly in this case, we are talking about statues of Jesus carrying the cross, but the odd virgin also makes an appearance. The whole procession ends, several hours after it starts, with the famous statue of "Jesus of Great Power"
from the church of San Francisco.

Several times I have been to the equivalent in Mexico City. In many ways it is very similar: lots of suffering and a big crowd (in the millions, there). It has the extra attraction of a passion play, telling the story of Jesus' crucification, and acted out in the streets by people from the local community. It even ends with the real crucification of Jesus and two theives on a nearby hill. Quito's version benefits from a more intimate atmosphere.

In the past, Quito's Penitential Procession was a very bloody affair. People would genuinely cut themselves, whip the skin from their backs, and burn themselves with candles. Several of my friends in Quito refuse to go to watch because of haunting memories of previous processions.


This year, I felt things were less extreme, though still pretty hard to understand for me. But then I am not a religious person, and I go to these things for cultural tourism. It reminded me that, for all its trappings of the modern world, Quito still has a bit of the medieval about it.

This "Jesus" dragged his cross for 4-5 hours through the
steep streets of Quito. His face tells the story.
Posted by Paul M Ramsay at Monday, April 09, 2012 No comments:

Paul Ramsay at a climate change monitoring workshop in Ecuador

I am in Quito, Ecuador, for a few weeks, combining research and teaching. Last week, I was one of a number of people working together in a workshop for the GLORIA climate change in mountains project. We were a small group from the northern and central Andes, representing monitoring efforts in Colombia, Ecuador, Perú and Bolivia. The idea of the workshop was to work through issues with data collection and to identify tricky plants that remained a mystery.

Given that the Tropical Andes is the world's hottest hotspot for plant diversity, working through the difficult groups is not at all easy. But we made good progress, with the help of the keen and knowledgeable participants, and the wonderful resources at the herbarium of the Pontificia Universidad Católica del Ecuador.

Now, everyone has returned home, but the monitoring goes on. Of course, mountains are among the first to show signs of changes in biodiversity as a result of climate change. The Andes have lots of endemic plants living at high altitudes, so knowing what is going on with their habitats is crucial to their conservation. Time will tell...
Posted by Paul M Ramsay at Monday, April 02, 2012 1 comment: